How To Get Your Company Better Media Coverage

There’s a lot of news out there, despite the decline of the kind that conjoins ink and paper. The Pew Research Center's 2015 State of the Media report concluded that "digital news entrants and experimentation, whether from longtime providers or new, are now so numerous and varied that they are difficult to keep track of." The dizzying array of options is only expanding. Pew has charted robust growth in just the past year for Vice, Vox, The Huffington Post, Politico, Mashable, and Atlantic Media’s Quartz. Even NPR’s podcast downloads were up 41% for the year.

So for companies, the opportunities for media coverage is on the upswing, but so are the risks of getting lost in the deluge and missing the audience you're aiming for. After all, news junkies are now in multiple places at once. According to the Reuters Institute for the Study of Journalism, two-thirds of smartphone users are now using their devices for news on at least a weekly basis. More than 28 million news stories were shared on Facebook in January 2015 alone, up from about 20 million in the same month last year.

How can you determine which announcements, interviews with execs, and other kinds of coverage to place at the outlets that can highlight your company for the people you most want to keep in the know? This handy flowchart can help. 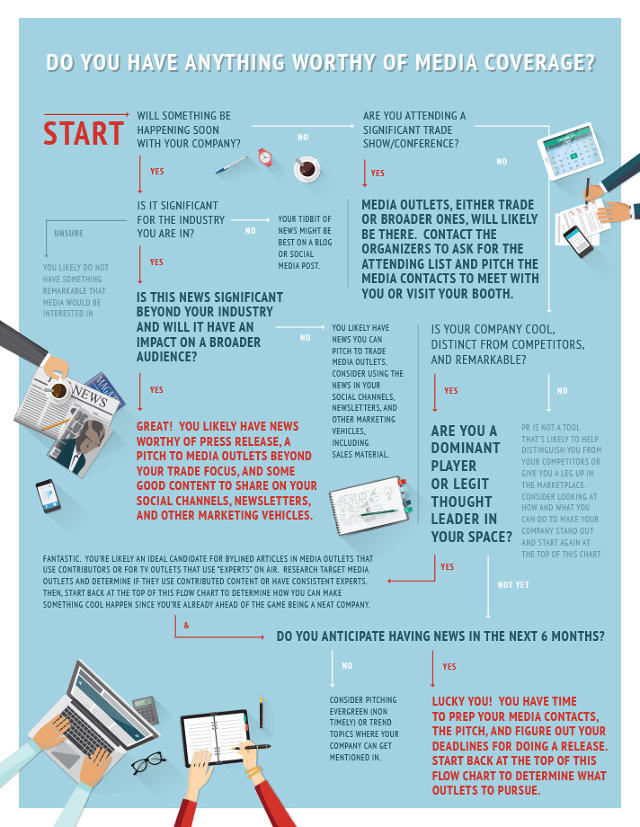