FiftyThree, developer of the inspirational Paper app, Pencil stylus, and a thriving interactive community for creators called Mix, today announced a Series B round of funding led by NEA. Although the company is new to our portfolio, co-founder Georg Petschnigg and his team are well known to NEA—and I’m thrilled to partner with them as the company grows their base of millions of users and tackles new verticals with their fresh take on productivity. 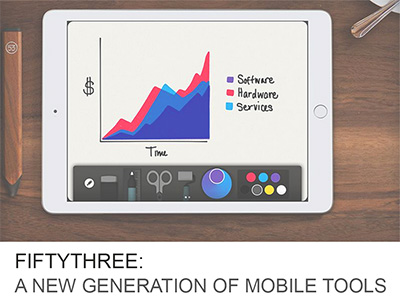 In 2013, we launched the NEA Design Studio, which nurtures entrepreneurial designers as they start new companies. I invited Georg Petschnigg of FiftyThree to speak to this group of founders and share his company’s story. Georg paid several visits to the NEA Design Studio and inspired the participants with the energy his company was pouring into every detail of their products’ design and utility. During this time, I watched FiftyThree nimbly grow into a suite of mobile, tactile products that allows every day creators to develop, document and share ideas in a modality as simple as using hand written notes and drawings (but much more elegantly).

Even with our increasing reliance upon technology, the pen and paper continue to thrive as mediums for capturing wellsprings of ideas. Why? Because existing software options, primarily relics of the client-server world, lack the interactivity, mobility, and intuitiveness to keep pace with our imagination. NEA has historically sought out companies that design technology to mirror existing human behavior rather than modify behavior to accommodate technology limitations. Tableau Software, for example, made data both accessible and visual with the same ease that one could sketch out a chart and graph. In doing so, the company created a tectonic shift in the data analysis market, increasing it tenfold. The enterprise market is in dire need of new software solutions for supporting innovation, and the team at FiftyThree recognizes that creative consumers and business professionals alike have similar needs for creating new ideas together.

Building on their success serving the consumer market for the past three years, the team at FiftyThree will release deeper collaboration features for the enterprise market and a host of new tools that enable users to diagram on screen as fast as they would on a whiteboard. It’s increasingly common for technologies to debut in the consumer space before finding their way into enterprise products—technologies such as social networking and file sharing were initially consumer focused, yet have now redefined enterprise productivity, much in the same way that Tableau improved data analysis. Companies like Yammer, Box, Evernote and Slack have all successfully leveraged this approach.

The founders of FiftyThree—Georg, Andrew, Julian and Jon—have built one of most exacting technology teams I’ve seen, and they lead the company with the same precision and synergy that define FiftyThree’s various products. The founding premise of the NEA Design Studio was that design cannot be an afterthought—it must be rooted in a company’s DNA. To me, FiftyThree exemplifies that philosophy, demonstrating what a company can create when it starts with impeccable product design. We are truly thrilled to be working with this talented team as they reimagine the “blank slate” for a mobile-first world.