By the Numbers: A Big Deal for Big Data as Monsanto Buys Climate Corporation 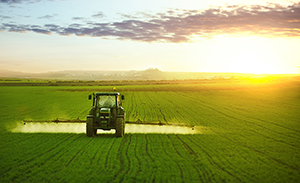 Today’s announcement that Monsanto will acquire Climate Corporation for about $1B is a big deal for many reasons: by the numbers, it’s one of the year’s largest M&A transactions for a venture-backed company, coming from a sector few would expect and a buyer far afield of the ‘usual suspects’ for a tech acquisition of this size.

The company is an outlier, in almost every sense of the word. Through several rounds of financing and some very graceful pivots, it’s been an exhilarating journey. Looking back, it’s hard to believe that for NEA, it was a deal that almost didn’t happen.

Early in the fall of 2006 I was scheduled to meet co-founder and CEO David Friedberg for coffee. I showed up, waited 20 minutes and still no sign of David. So I finished my coffee and left. I heard from him shortly thereafter: he’d been delayed by rain :-) Charmed by the irony, I went back to the coffee shop to meet him.

David and his co-founder Siraj Khaliq, both Google alums, had essentially built a weather derivative platform, running simulations on historical and forecasted weather data to price weather-related risk. This was big data before big data was even a trend. The initial use case was weather insurance for consumers—i.e., someone books a vacation and tacks on weather insurance at the point of purchase. Frankly, investing in weather insurance was pretty far off the reservation, even for a ‘diversified’ fund like NEA. But the technology was right up our alley, and we liked it. And we liked the founders; David and Siraj are both brilliant. So we made a $1M seed investment, but it was a controversial decision within the partnership.

In those first few years, the company (then known as WeatherBill) expanded from consumer travel to high profile events like the US Open. For years they’ve worked with the USTA, insuring the US Open for weather-related losses, like delays and cancellations due to rain. That was all chugging along, but the real inflection point came when they moved into the crop insurance space with a supplementary, multi-peril crop insurance (MPCI) product that was received very well by the grower community.

The next evolution is likely to be Climate.com—a tool that uses some of the same climatology data and couples it with agronomy data to help growers with their production and risk management through better planning, tracking, and yield optimization. This technology will make a huge difference to growers, and will no doubt be an important competitive advantage to Monsanto in an industry that’s highly competitive.

Since our initial seed investment, NEA continued to invest through A, B and C rounds as the company built and scaled its platform. The ride was turbulent at times. Yet while the landscape may have shifted during the journey, the driving technology was always dead on. With today’s announcement, Climate Corp is an early winner in a wave of big data plays that will have an impact well beyond the traditional ‘tech’ sphere.

One last thought on outliers… by the numbers, a venture firm raising $2.5B funds has to make a habit of finding those outliers and helping them flourish. It’s especially fun when those outliers come from unexpected or unconventional places, bowling over critics and even surprising staunch supporters. Over the last seven years, it’s been a privilege to work with David, Siraj and their team as they transformed a brilliant idea into a thriving business. They chose to partner with Monsanto because they believe it’s the right platform to continue advancing their technology and their vision, and I couldn’t be more excited for them as they begin this new journey.